If you are a gaming buff, it won’t be hard to understand how far a gamer can go in their favorite game. At times it can also include activating cheats that enable the player to gain extra health or some unique powers. This improves his chances of succeeding at the game or clearing a difficult game level or accomplishing some prized milestones. It is possible to use two types of cheats to do this. In-game cheats are typically included by developers to bestow extra powers or advantages on the user. However, today we are going to talk about Roblox executors which are external exploits and offer unique advantages to gamers.

Roblox is a popular platform for gamers as well as game developers. It allows anyone to develop their own games with some basic tools provided as part of the Roblox Studio. Another aspect is gamers who come here to play games created by other users. However, there is a third type of user as well.

Gamers who are here to use Roblox exploits to activate hacks or cheats in a user-created game. Since the platform employs Lua script for programming, it is not so easy to develop exploits as well. Still, there are a number of dedicated developers who have created successful exploits to run complex scripts in the game.

What are Roblox Executors?

These script executors run scripts in Roblox games with the intent to manipulate gameplay and achieve specific advantages. A few examples of such hacks include speed hacks which enable increasing or reducing the speed of a game character.

Are All Roblox Exploits Similar?

One important question here is that, are all exploits alike and work in the same way. Well, some fundamentals might be the same but most exploits are very different from each other. KRNL is one of the best Roblox executors which makes it easy for users to activate some of the most advanced hacks.

In general, exploits come in all kinds of shapes and sizes. While some are very simple, some others are designed to handle complex scripts. They can easily activate a wide variety of hacks.

How are Roblox Executors Different from Conventional Cheat Codes?

It is a very important question often left unanswered and causes a lot of confusion among gamers. It is maybe a little hard to appreciate for gamers who are not so conversant with the game coding concepts and programming scripts. However, we will try to explain it in very simple language for the benefit of readers.

These conventional cheats are what you might have used in your favorite games as kids or playing with friends to showcase your skills. These cheat codes are fixed for any game and can be activated quite easily by typing certain key phrases or pressing controller keys as well as other keys in a specific sequence.

They endow users with special abilities within a game that typically allows the user to overcome levels with difficult gameplay. Alternatively, some cheats help accumulate rewards or milestones within a game. However, all these are in a sense in-built and are developed by original developers to be part of the game.

The original purpose for creating these cheats is usually quite different. These special cheat codes make it easier for developers to see how well the game environment is functioning and if variables or objects within a game are responsive enough.

Sometimes, these are also meant to help clear difficult levels by entering cheats which can save a user a lot of time without losing interest in the game itself. In short, these cheat codes may be called cheats but they are essentially an integral part of the game programming and not an external or disruptive element.

Another type of game cheats is external exploits which are essentially disruptive elements to the game environment. This is because they seek to manipulate the original game script and achieve specific outcomes by running scripts created outside of the game. They are nearer to hacks which are often considered external and unauthorized forms of intrusions or interference with a protected stream of data or coded software.

Still, they are not literal hacks because they are not trying to steal any data or information from the software which is often the purpose of hacking. Here, the singular goal is to activate hacks in a game. In this case, activating cheats or hacks in Roblox games.

These external exploits can be quite complex and work with two primary components. One is the script executor or the tool which is used to run scripts and for injecting codes into a game script. Another component is the carefully coded script which is the key to activating these cheats. What sets apart these exploits is that they can change gameplay in ways that were not originally intended by creators.

Read More: How to Download So Player on Firestick?

How is KRNL Different from Other Roblox Executors? 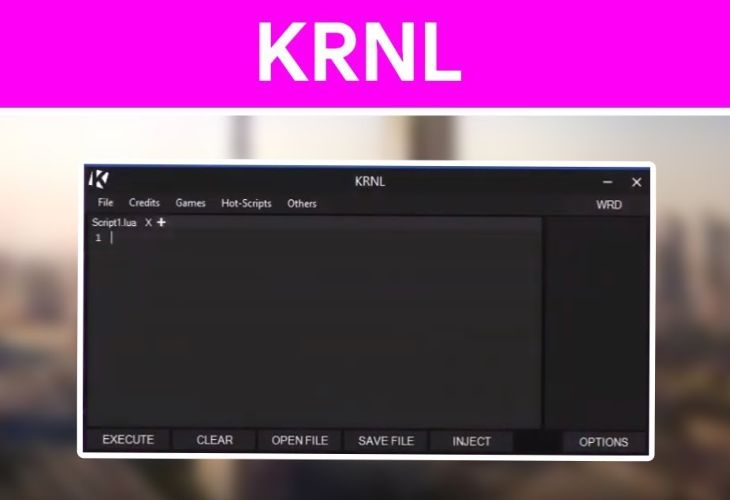 KRNL serves as an ideal example of a Roblox exploit meant to run advanced scripts and hack Roblox games in a hassle-free manner. It offers one of the most stable gameplays and is safer than most other exploits available. KRNL download is very simple but requires you to deactivate Antivirus on your PC temporarily. If you keep antivirus on, it can detect KRNL as malware and remove it or prevent the download itself.

You need to download KRNL from an authentic source or its official site and activate it with a specially-generated KRNL key to access the features. This Roblox exploit is updated regularly which includes a number of feature updates to allow consistent operation and full functionality.

It is important to use updated versions of the exploit. There are a number of anti-exploit features and tools employed by Roblox to block exploits from gameplay. Game updates can also render some exploits non-functional by modifying game variables or environments. This is another reason to be careful in using any exploits.

What are Server Side Scripts Roblox?

This refers to a service where certain key data assets are securely stored on the server to ensure data safety. In other words, Roblox seeks to protect its script and related data from potential hackers or clients (players)  by storing it on the server. Players cannot access the data. This keeps the data sets safe from developers engaged in creating scripts to exploit the original game scripts in Roblox. This is an important part of Roblox taking measures to protect its game resources from exploits.

What We Have Learned

We have discussed the basic idea and functioning of Roblox executors and how they are different from conventional cheat codes. We hope you got to understand the mechanics behind activating Roblox hacks. You would also become aware of the ways in which Roblox seeks to secure its game scripts from users and hackers alike. This can help you understand what precautions you might need to stay safe on Roblox while hacking and avoid being banned.

How to Play Save the World in Fortnite? Identify the Changes in 2022